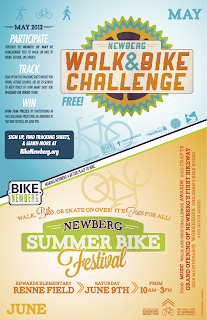 Last week saw the end of our self-imposed, month-long biking experiment, so I thought I'd share our results and my reflections on the experience. The experiment consisted of my husband, Joel, and me trying to bike (or walk) as much as we can and trying to drive less. We kept track of the number of miles we biked, walked, drove our car for fun or necessity, drove our car for work, carpooled in our car and carpooled in other people's cars. So first off, the numbers (based on 20 mpg and $4/gallon):

So...we didn't do all that well, by any stretch of the imagination. I mean, we certainly biked more than usual, and saving $94/month and 23.5 gallons of gas is SOMETHING, but it's not huge. At the same time, if we did this every month, that would start to feel a bit more significant. That would be close to $1200/year and close to 300 gallons of gas. What if every family in the United States did this?

A few things that stand out to me: first, there was only one day in the entire month that I didn't ride my bike. I rode an average of 4.4 miles/day. But if you average out all our driving, we drove an average of 36.52 miles PER DAY! Ouch. Some of that was for work--Joel had a couple work trips and several photo-oriented shorter trips. Even if you take out all the work and carpooling, we still drove an average of 17 miles per day for fun or what felt like necessity at the time.

Partially, this experiment was just humbling. I don't tend to think that we drive that much, but keeping track for a month really made me aware of how much we just randomly decide, "Hey, let's go do such-and-such," of an evening or weekend, and we just go do it. This month we even kept ourselves from acting on some of those impulses because we were trying to be more intentional about not driving as much. Sometimes we tried to combine trips so we only had to go once instead of a number of times, so that was good. Imagine what a normal month looks like where we AREN'T being that intentional!

This month was also strengthening. It was physically strengthening, in that my muscles are much stronger. I noticed a huge difference from the beginning of the month where I could hardly drag my two boys up the last hill to our house, to the end of the month where I could do it without being too out of breath in a higher gear. It also reminded me of how much I enjoy biking and being outside. I really enjoyed the fact that I got to be outside a ton more this month than usual. It's spring so I noticed things budding and leafing out. My resolve for biking in the rain was also strengthened. I had my rain gear all organized and ready to go at all times, so it wasn't hard to just pull on the rain gear and be on my way just as if it were sunny. My resolve for biking in general was also strengthened. I plan to keep working at this and try to increase the number of miles I ride each month, at least for the summer (or maybe do better on the ratio of walking and biking to driving.)

Biking every day became a habit. At the beginning of the month my then-16-month-old would often ask me, "Go? Go? Go? Car? Car?" By the end of the month he'd changed it to, "Go? Go? Go? Bike? Bike?" He hated wearing his helmet at the beginning, but now it's just normal. The boys do get a little frustrated if I forget to bring snacks for them to have in the bike trailer, though! (Fruit leather, string cheese, cheddar bunnies...)

This experiment brought me face to face with my own sense of entitlement. I had a hard time knowing when I should sacrifice what I or my family wanted to do and when it was OK to drive somewhere, just this once. I felt entitled to go hang out in a coffee shop in the next town with some friends on a Saturday afternoon. I felt like it was necessary to meet a couple for whom we're doing premarital counseling in locations 40+ miles away more than once this month. Sometimes we "had" to drive to meeting because we had to get our two kids plus a guitar there. Sometimes I drove because I was late. I felt entitled to drive to another city for date night. It was really interesting hearing my internal justifications, and noticing how I set up my schedule and my expectations around assuming I'll be able to drive. One thing I didn't even TRY was public transportation. We have a new system of public transit in town and I have yet to set foot on it, though I think it's great. But if I'm honest I must admit that in some ways I think I must feel entitled to not have to take a bus.

Overall, this experiment was a good experience. I probably showed up places a few minutes late and overly-bedraggled and sweaty, but hey--my conscience was relatively clear!

So I'm going to keep working on this. It's kind of exciting because I recently heard about something they're doing in our little town called the May Walk & Bike Challenge. They've been recently promoting biking a lot more: there's a new bike map and some new bike symbols on the side roads. There's going to be a summer bike festival! So it's cool that our little town is really trying to do something to promote this healthier way of living--healthier for each of us and for our world. I'm going to participate in this Walk & Bike Challenge, and I hope many others will, too!
Posted by Unknown at 7:00 AM

Cherice, I was interested to see how your experiment turned out. I recently finished a similar experiment:
When I divorced last fall I couldn't afford a car. I had offers of assistance, but chose instead to see whether I could get by without a vehicle for a while. My attempt at a car-free lifestyle was complicated because I have a daughter in a wheelchair, but with careful planning we made it through to spring. I enjoyed the financial savings, health benefits, and slower, simpler, more thoughtful lifestyle. There were some downsides though including wasted time (4 trips to the store to bring back 4 chairs), risky activities (carrying paint cans on my bicycle, or pushing a wheelchair down busy roads at night), and inconveniencing loved ones (the one time we left town, family members drove 2 hours each way to pick us up and again to bring us home). But by completely eliminating all auto/gas expenses for several months I was quickly able to save enough money to buy a car.
Now I'm trying to find a balance, where I use the car to avoid those downsides while not using it so much that I give up the positive benefits. I'm finding (and it seems you did too) that it takes some real discipline to sort 'needs' from 'wants' when it is just so easy to get in the car and go.