On Saturday in At-Tuwani, a little village in the South Hebron Hills in Occupied Palestine, a group of Israeli settlers from Havot Ma'on Settlement, south of Yatta, attacked a few Palestinian shepherds and their sheep, as well as their international accompaniers from Christian Peacemaker Teams. The Palestinians were able to herd their sheep out of the way while the CPTers lived up to their slogan of "Getting In the Way." CPT called the Israeli police, who are in charge in that area, but the police nor the military responded right away. The settlers walked off with two of the Palestinians' donkeys, and one was found dead later. When this was discovered, the police and Israeli Defense Force did eventually come to investigate the situation. One CPTer has an abrasion from being hit with a rock, which you can see in the photos here. CPT has a team in At-Tuwani full time, as requested by the people who live there. They help the grassroots nonviolent direct actions of the villagers in the area by giving support and spreading news to the world.

It's only a donkey, and yet donkeys are terribly important for the people in At-Tuwani. Since June their vehicular access to any major town has been cut off by a road block. Here's a picture of me there at the very beginning of June when there was just a temporary block which was in place at the time and then removed. 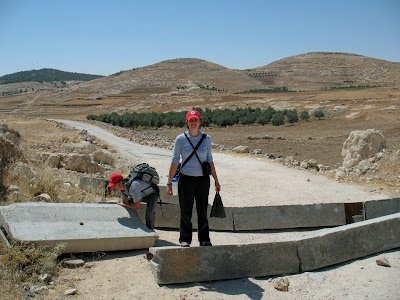 A couple weeks later a permanent roadblock was erected. So to get any goods (or selves) to and from market, donkeys are very useful--not to mention their uses around a farm community. Perhaps it was this cute donkey that lost its life: 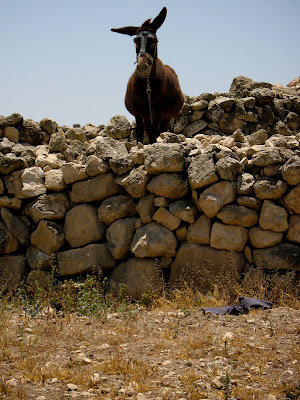 Or this herd of sheep chased off their mountainside: 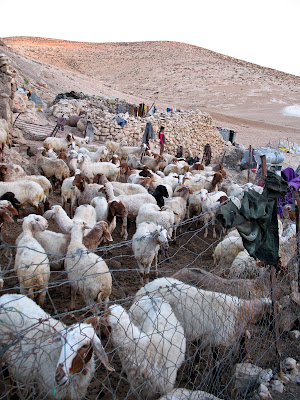 Or these wonderful children whose parents are being intimidated and who must therefore live in a constant state of fear and anxiety: 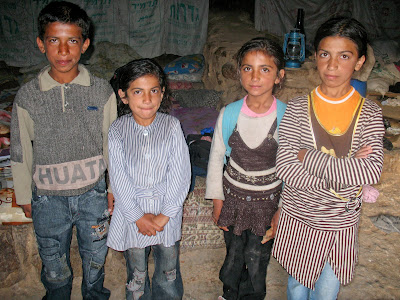 Obviously that kind of violence serves as a warning, instilling fear in the shepherds, attempting to scare the villagers off grazing their animals on this land, which has been their traditional grazing land for generations. The settlers want to expand their settlement even though there are not enough people living there to fill the homes currently built. It's hard to understand how and why people do this kind of thing to each other (and animals). How can it not be apparent that everyone is safer when all are allowed to live lives free of fear? Why is it that we as humans have such a hard time recognizing that my right to live a good life does not mean I must take that right from others?

Hopefully this event is proof that the NY Times article I posted the other day is true--hopefully it means the settlers are becoming increasingly desperate, seeing their chances for completely taking over this land as more and more unlikely, due to the world's recognition of the injustice going on in Palestine. But I'm not sure this is the case. If this WAS the case, the police and the IDF would have responded in a more timely manner, wanting to prove their non-complicity with the settlers' unjust actions. Maybe soon this will be the case. For now we can just hope and pray, become CPTers and "get in the way," and continue educating about the situation on the ground in Palestine.

Let's also hold the Gaza Strip in the Light: there aren't even any international peace teams who are able to be there currently because it is closed to all but Israeli military and diplomats most of the time. Here is an article about how CPT is attempting to address that situation, however. A woman from CPT, along with other internationals, got to the Gaza Strip by way of a small boat as a protest. Go read the article!
Posted by Unknown at 8:56 PM

I so thank God for CPT, and just wish thousands of others were involved. I hope the Israelis soon wake up to reality. Because they are likely the most persecuted people in history many feel they have an entitlement to take back the O. T. lands. Many American Christians agree, although their argument is not for the good of the Jews but for hurrying up the second coming of Jesus. It is hard for me to accept either argument.

Thanks, Joel, for your direct involvement beginning tomorrow. May God bless you, the Palestinians you help, and indirectly, the Israelis whom you will help by encouraging to be more humane.