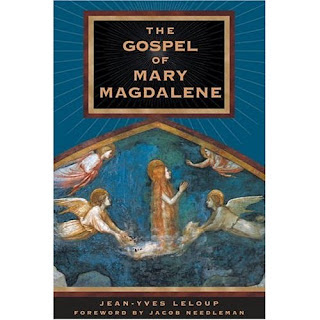 I wrote about this little "gospel" almost two years ago in this post, but this semester I wrote a paper about it. The paper was for my "Biblical Canon" class, so I wrote a paper exploring the theology presented in the Gospel of Mary and its relationship to the biblical literature. I would still recommend reading the translation and commentary by Jean Yves-Leloup, although I read a bunch of other commentaries and articles for this paper. I liked this translation best because it was most poetic, and the commentary engaged the text in a spiritual manner rather than simply academic. So unless you want to learn really academic stuff about the text, read Leloup's version.

Most scholars assumed the Gospel of Mary was a Gnostic work because it was found bound in the same codex with two other Gnostic texts, but there was also a non-Gnostic text in the same volume so that is not a very good argument. Fragments of it were also found at Oxyrhynchus, an ancient town in Egypt with a great garbage dump that archaeologists look through. At Oxyrhynchus, no (other) Gnostic texts have been found, although thirty of the canonical books and a few others from the Apocrypha or non-canonical Christian texts have been found. Plus, unless you know information about Gnosticism from other clearly Gnostic texts, you cannot tell anything about Gnosticism from the Gospel of Mary. It doesn't even mention "gnosis," translated "knowledge" or "wisdom." In fact, wisdom is only used twice, to refer to "intoxicated wisdom" and "guileful wisdom," parts of wrath that the soul must evade. One would think a "Gnostic" text would include a positive understanding of "gnosis." The idea of gnosis is usually a secret teaching that people have to get to a certain rank in the community in order to learn, but in the Gospel of Mary, although she receives a revelation that the others don't receive, her revelation is freely given to whoever will listen--it is not a secret. So I think this text was written to be Christian, and although there are hints of what later perhaps formed into Gnosticism, there are also such hints in canonical texts such as John and Mark. Gnosticism also usually had an elaborate mythology including several gods and goddesses and a rejection of the flesh, but the Gospel of Mary does not have these (at least in the 9/19 pages we currently have).

I agree with Esther de Boer who says she thinks the Gospel of Mary was written to be a Christian text that spoke in the language of Stoicism to reach out to the Hellenistic culture. She makes many connections between the language of matter, nature, the "nous" (mind) and other things that were similar to Stoicism. The Gospel of Mary goes beyond the Stoic understanding however, because they rejected the physical world of matter and nature, and they thought perfection was attainable. The Gospel of Mary rejects the evil part of the physical world and says that evil is an improper mixture of matter and nature, but "matter" is the word it uses for what Christians might term the "fallen" parts of creation, while "nature" is the good parts of the physical world. As humans alone we cannot reach perfection, according to the Gospel of Mary, but we need the Savior, who alone can separate the improper mixture and help us focus only on the good parts of nature. (The Gospel of Mary never says the Savior is Jesus in the portion we have, but it is assumed since he is a resurrected teacher talking to a group of disciples with the names we know from the biblical texts.)

Neither does the Gospel of Mary elevate the spiritual too much. Mary asks the Savior what is responsible for understanding that a vision comes from God: is it the senses (the soul) or the spirit? He says it is neither: it is the "nous" (roughly translated "mind") which lies between the two. The nous is the soul's access to the spiritual plane, but it does not mean that the physical world of the soul is rejected. God can use the physical world to do good and to speak to people through. It is the mind which understands that something is from God, whether it is a physical event or a more spiritual event. This is interesting, because the Gospel of Mary suggests a sort of continuing revelation, but rather than this being ecstatic or ascetic, it is almost what we would term "rational." Most groups reject continuing revelation because it goes off the deep end, being completely emotional/sensual or rejecting the senses altogether. The Gospel of Mary says no, God will speak to you in your ordinary day in ways you can understand.

The Gospel of Mary seems like a very Quakerly text, actually, because of this emphasis on rational continuing revelation, as well as an emphasis on equality of all people (Mary can teach the male disciples), and Mary also becomes silent because it is out of the silence that the Savior speaks to her. But more on these later.

I turned in my last paper for the year Monday morning!!! It was a good feeling. Since then I've been hanging out with my boys, baking muffins, making granola, cooking two kinds of soup in order to get rid of ingredients we've had floating around and neither one have had energy to do anything with recently, for obvious reasons.

Now there are a mountain of dishes in the sink, so I figured this was a good time to write a blog entry... =)

I promised to write about some of the things I learned doing my finals, so I'll start with the first paper I turned in, which was the one on Thekla. She's the heroine of the "Acts of Paul & Thekla" (2nd century) and the "Life & Miracles of Thekla" (5th century). I wrote about her before so if you want the background info on her story you can read my previous post first. (By the way, I think the British way to spell her name is Thekla and the American way is Thecla, but I like it with a "k" because it looks better and it's more similar to the Greek, which doesn't really have a "c.") I wrote this paper for my class "Medieval Women Leaders of the Church," even though Thekla is not exactly Medieval. She had a huge cult following in the early Middle Ages, however, and even into the late Middle Ages many nuns found inspiration in her story.

One thing that stood out to me when doing this research is the fact that so many of the "apocryphal" Christian texts had women as main characters, and these works were seen as edifying and useful for centuries, but they were not canonized and so we don't think of them as important. It seems like most Christians assume that since there aren't really women as main characters in biblical books, that just must have been how the culture was--but that isn't true. There is a book called the "Acts of Xanthippe, Polyxena and Rebecca," fairly similar to "Acts of Paul & Thekla," where these three female disciples of Paul are highlighted. And in other apocryphal Acts such as the "Acts of John" and "Acts of Peter" women play prominent roles. These were mainly written in the second and third centuries, so when people got around to formalizing the biblical canon in the fourth and fifth centuries they threw these out largely because they were not written in the apostolic age.

Now, don't get me wrong--just because "Acts of Paul & Thekla" or other apocryphal Acts have female characters doesn't mean those women were shown in a particularly flattering light for modern feminist standards, but at least they were there--at least they spoke and had a role and did miracles and acted in similar ways to the male apostles. In the Bible we don't have any examples like that.

Even scholars who aren't feminists think "Acts of Paul & Thekla" is "orthodox" in terms of its theological content, so I see no harm in suggesting that people read it. Thekla was commissioned by Paul to go and spread the gospel, to preach and to baptize, and although this was probably not the words of Paul it was the words of some male in the second century, so not everyone had a problem with women in ministry early on.

Some suggest that the Pastoral Epistles (written at the end of the first century or beginning of the second century) were written as a reaction to stories like Thekla. Although her story was probably not written down yet, it was likely in circulation in the oral tradition. The Pastorals (especially Timothy) emphasize women's submission and a return to the Greco-Roman household code in order to make Christianity respectable to the Hellenistic culture.

This is a problem with which we still struggle: how do we make our religions palatable to the world around us without losing our message and our focus? Christianity was never meant to be a respectable faith: it was meant to be life-changing, and people would be brought in by recognition of the power of the love of God in Christ, working through those who profess Christ. It was meant to be a faith where people were persecuted because they stood up against the evil systems of the world, like Thekla did.

How do we find that balance between being "respectable" enough to not just throw our lives away, and passionately living out our faith no matter what the cost? How do we make sure we're canonizing Theklas instead of compromising our principles?
Posted by Unknown at 9:08 PM 3 comments: