In Jerusalem on my trip with CPT, in addition to learning about the conflict directly, we visited holy sites for three different religions, all of which trace their roots back to Abraham. 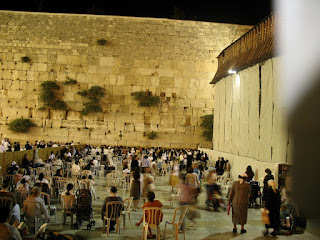 We visited Jewish sites, especially the Wailing Wall. This is the remnant of the wall outside the Temple, which was destroyed in 70 CE. As I think I mentioned in a previous post, we went to the Wailing Wall on the last night of the trip, which was a Jewish holy day. Families came down to the wall all dressed up and went to pray at the wall. The wall was all lit up. There is a men's side and a women's side. People go up to the wall and pray at it, some putting notes into cracks in the wall. The women (and some of the men) back away from the wall out of reverence for God. There was an aura of festivity that night, but also a sense of yearning and pain. The Wailing Wall is a reminder of the hope that has not been realized for almost 2,000 years: the rebuilding of the Temple, the place God resides on Earth according to the Jewish faith. 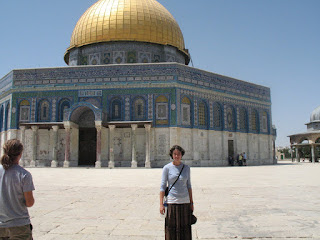 On the Temple Mount is the Al-Aqsa Mosque, which has been there since the 8th century. It is the most holy Muslim site outside Mecca. The mosque is beautiful, as can be seen from the pictures.

We couldn't go inside because it's for Muslims only, but we could roam the grounds and look at the outside. On the grounds there are ancient olive trees that were probably planted after the Temple was destroyed. It was incredible to sit under living things which have been around, growing in the soil of the Holy Land, for that long.

There is a sign (pictured) on the way in to the mosque grounds saying Jews aren't allowed into the area by Torah Law. I heard it is because they don't know exactly where the Holy of Holies was and don't want to wander onto the sacred spot by mistake. 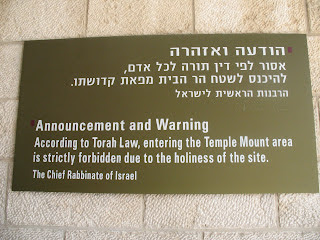 From the mosque you can look out at the Mount of Olives. It is a holy site for both Jews and Christians. Here's a picture of arches at the mosque overlooking the Mount of Olives. It is sacred to the Jews because they believe it is where the Messiah will descend when he comes, and will raise the dead starting from there. There are Jewish graves all over the hill. It is a burial place of incredible honor. 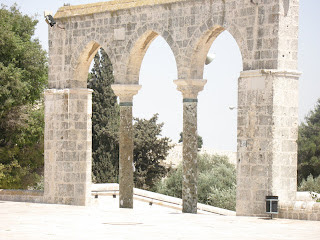 For Christians, the Mount of Olives is a sacred place because it is where Jesus went to pray. The olive trees in one area are ones that have probably been there since the Temple destruction as well. They are believed to have grown up from the roots of those that were destroyed in 70CE, so they are the very plants under which Jesus prayed. We visited what tradition says is the Garden of Gethsemane, where Jesus prayed that the cup of death pass from him if it was possible, and prayed that God's will be done. We visited the site where tradition says Jesus prayed and wept for Jerusalem and all her children, who he wanted to gather under his wings like a mother hen. And we followed the Via Dolorosa, the Way of the Cross. 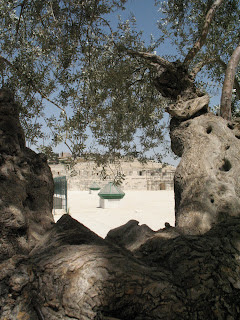 Being the good Quaker I am, I didn't know anything about the stations except what I learned from Mel Gibson's rendition of the Passion of the Christ...not the best! But we read from Sabeel's social-justice-oriented Way of the Cross booklet at each station, which connected what tradition says happened at the stations with stories of 20th and 21st century Palestinians, and the Christian call to nonviolent action and solidarity with the oppressed.

Some of us also visited the Church of the Holy Sepulcher, which was interesting. It is supposedly built (by St Helen, mother of Constantine, I believe) on the site where Jesus was crucified. It is a huge, rambling piece of architecture. Actually I think it is two church buildings--one Roman Catholic and one Greek Orthodox. There are priests walking through in groups all the time chanting, tourists everywhere. There is a large gaudy structure inside a huge room where people were waiting in lines reminiscent of Disneyland to see the exact site where Jesus died. The people I was with and I didn't go because we didn't want to wait in line. (I don't have pictures of this because my batteries died while we were out, so I'll perhaps post some when I get them from my friend.) My Quaker self squirmed at all the gaudiness and all the stuff built as a memorial, as if for a dead person, as if the more ornate something was the more true it made our religion instead of yours, but the part of me interested in art and history was fascinated by all the different types of art and architecture and various languages. It was an interesting experience. (The best part was exploring nooks and crannies, and finding a random cave we went down in and explored as best we could using a small flashlight one person had on them!)

Anyway, the point of this post is that it's amazing how much history is in the city of Jerusalem, and not only history for one people group: there is history of such sacred import for three major religions, holy sites incomparable with anywhere else in the world. As a Quaker I have a hard time connecting with a specific place's sacredness over anywhere else--all places are ones where we can meet God, where God dwells with us. And yet it's amazing to have all these concentrated sites of where we have stories of God's interaction with humanity all in one area. These three religions trace their spiritual ancestry back to one man (and two women). They have so much in common, and yet such major differences. But it is incredibly sad that they are destroying the land they see as so holy for the sake of these differences, when that is not really a part of any of their religions.

Christians, of course, are supposed to enact Christ's ways of love through nonviolence and help people come to know God by their love.

Muslims are encouraged to spread Islam through conquest, yes, but to allow indigenous people to live under their own religion. Muslims are to show the truth of Islam by their life and invite others into it, but not to force others to conversion or to decimate other people groups if they refuse to convert.

Jews perhaps have the most theological precedent for genocide in the Promised Land, but a) they are not to act thus without direct command from God and direct orders about how and when to carry it out, and b) there are passages in the Hebrew Scriptures stating that people with other beliefs are supposed to be allowed to live in the land--foreigners and aliens are to be treated as equals in the Promised Land, not as second-class citizens (or less). There is really no precedent for destroying an entire people group. Most scholars believe the Israelites originally moved into the land gradually, acquiring property and building their society, around which the culture of the area began to focus. Probably the genocides where God commanded them to go in and kill each man, woman, child and animal did not actually occur that way but were embellished later.

So it is difficult to see this land so torn apart, spiritual cousins separated by walls and destroying one another, people not allowing each other to practice their faiths in peace, and politicians using people's "faith" to wage continual war.

May the children of Abraham, Sarah and Hagar one day be able to live together in peace, worshiping God together in ways that honor God and one another.
Posted by Unknown at 2:52 PM 3 comments:

Here are a couple of links to interviews so you can hear perspectives of others who were on the Christian Peacemaker Teams delegation to Israel/Palestine with me:

If you want to read other blogs about CPT in Israel/Palestine, here is Brooke's blog (she was on the delegation with me), here is Joy's blog (she's a Northwest Quaker full time with CPT in At Tuwani), and here's Jessica's blog (also a full time CPTer in At Tuwani). Here is a blog by Sami, a Palestinian we met who works with the Holy Land Trust in Bethlehem. He organized the demonstration against the wall in which we participated.
Posted by Unknown at 2:50 PM 1 comment: 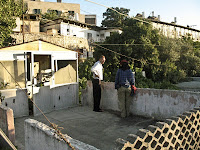 One night on my trip with CPT a few of us stayed with a family in Tel Rumeida, where Abraham is said to have lived. This family moved there after their home and land was confiscated in 1948 in a village in what is now Israel. Now there is an Israeli settlement in their backyard, they cannot use the road that accesses their home (they have to climb over neighbors' walls to get to their house), and the settlers attack their homes especially on holy days. At left the pictures shows the man we stayed with showing us the settlement from his roof. He also showed us videos he and his neighbors have taken of settler violence, and they are sad and chilling. They're available on B'Tselem's website (an Israeli human rights organization). B'Tselem is doing a campaign called "Shoot Back" where they hand out video cameras so that people can get settler violence and harassment on tape for use in trials and in media. Go watch one particularly eye-opening clip on You Tube which the gentleman we stayed with showed to us (here). 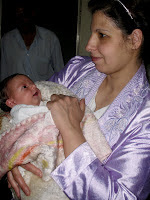 The family we stayed with said there used to be over 300 Palestinian families in the neighborhood; now only 50 remain. There are 11 settler families guarded by hundreds of soldiers. (Remember, this is within the West Bank.) For nearly three years from 2001-2003 the Palestinians living in the Tel Rumeida neighborhood were under 24-hour curfew, meaning they could not leave their homes for food, work or emergencies all day every day, except for a few hours every few weeks or months at the whim of the Israeli military. Any Palestinians moving about outside their homes would be shot. The settlers had no curfew. Even today, although the curfew is usually lifted, there are hundreds of checkpoints in Hebron, and about four women die each year at checkpoints when they are in labor. 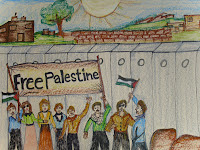 Many more must give birth while waiting at checkpoints. The woman we stayed with had an 11-day-old baby named Khaled. She eventually made it to a hospital but only just barely.

She enjoys doing art depicting Palestinian liberation as well as the devastation Palestinians face on a daily basis. Here is one of her pieces.
Posted by Unknown at 5:55 PM No comments: