OK, so another of the promised book reviews...I keep reading books on top of the ones I've already said I'll blog about so I'm about 10 books behind or so! 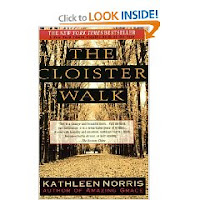 Anyway, The Cloister Walk by Kathleen Norris is a great book. A quote on the cover describes it as similar to a lectio divina, which is a way of deeply meditating on a few lines of text, generally from the Bible. But I think it is necessary to read this book in that way. Not as scripture, of course, but in a sacred mind frame and slowly and meditatively enough that it can sink in. It's not a novel and shouldn't be read like one, because the point is the slow rhythm of it. In tone it kind of reminded me of some of Annie Dillard, especially A Pilgrim at Tinker Creek, because they both are so layered and full of depth that you can't take too much at a time. But the writing is beautiful, even about subjects about which you didn't know you were interested.

The Cloister Walk is about the author's journey as she tells us about her discovery of the monastic life. She is not herself a Catholic or a nun--in fact she's married. But she spends a great deal of time in monasteries and cloisters, sometimes doing writing or research or teaching, sometimes just being. When she's not living in such a community she attends services at nearby monasteries, and tries to participate frequently in the rhythm of the liturgical calendar and even the daily hours. She finds joy in the rhythm and repetition, and the quietness and (Friends might say) centeredness of so many monks and nuns she meets.

I find it interesting that in a world where ritual--at least spiritual ritual--is so lacking, many people are again drawn to it. I myself have had that experience. I had never participated in celebrating a traditional Passover until last year, when some Jewish friends invited us to their Paschal meal. It was so amazing! And yet, would I think so if I'd grown up with it? Maybe it's amazing because it's so novel, and at the same time we know that people have been practicing it for millenia. In our culture, maybe we let others carry on the ritual for us, and just enjoy those little dips in their depths that we get every once in a while without having to go through the drudgery of actually having to practice it day after day, year after year.

As a Quaker I find this cultural hunger for ritual intriguing. I mean, Friends have our own rituals, some similar to other denominations (like going to worship on Sunday mornings), even though we've rejected a lot of the obvious rituals. I personally like worshiping in places I know have been places of Friends worship for three and a half centuries, or even three centuries like the meetinghouse we attended in New Jersey. A place like that can take on a sense of depth and contemplation because it's set aside for that purpose. I imagine it's the same for Catholics with monasteries. To know monks and/or nuns have prayed, lived and worked in those rooms and chapels for years upon years must be something that brings one's spirit to a deeper level almost automatically, and maybe even the space can take on that sense. Or maybe it's just our own knowledge of that place that gives us the sense of awe about it, I don't know.

At any rate, it would be quite interesting to be immersed in the kind of spiritual attentiveness that occurs throughout the day for monks and nuns, to participate in attending all the hours as well as in the work of the community. It can't be easy to do all one's life, but it does seem a privilege to be able to do it for any length of time. It used to be that people couldn't join a monastery or nunnery unless they had enough money to give to the community, and I can see why--it seems like a huge privilege to be able to devote one's life so fully to prayer and contemplation. It's a privilege in a strange way, but one that perhaps we all wish we could do in some form: set our lives free of other distractions and just focus on the Ultimate. At least by reading Norris's book we can set aside a little of our time and move into the rhythms of that form of spiritual life for a time.
Posted by Unknown at 12:55 AM 1 comment:

Did you all hear about this? Yesterday early in the morning the Israeli military attacked a peaceful (unarmed) flotilla of six ships carrying hundreds of peace activists from around the world, as well as humanitarian supplies. It sounds like some dignitaries from various places were also aboard the ship. The news reports aren't sure how many people died, but at least two and up to fifteen. The New York Times says nine, but it sounds like they haven't had access to interview anyone on the ships and have to take the Israeli military's word for it--and videos from the flotilla's perspective are available on YouTube.

When they were attacked they were in international waters in the Mediterranean.

Israel says Gaza is its own nation but keeps people from entering via land (which would have to take place via Israel, or by a small border with Egypt), and even by sea, even for bringing humanitarian aid. No matter what you think about the conflict between Israel and Palestine, it's pretty obvious that unarmed peace activists bringing much-needed food and supplies to civilians should not be murdered.

Here are links to some of the news reports on this: