i worked as the peace education coordinator for my yearly meeting last year (2004-5) and had a blog where i posted thoughts about peace, quakerism and christianity. if you want to check it out here's the site: http://strategicnetwork.org/index.php?loc=b&b=8&view=v& 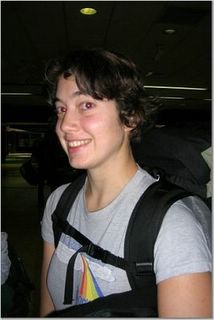 Posted by Unknown at 8:14 PM No comments:

check out this website for freedom friends, started by some cool people i know from oregon, and their list of "you might be a quaker if..." http://freedomfriends.org/FF-Pastors.htm

i think that's a fairly awesome way of describing quakers.
Posted by Unknown at 7:51 PM No comments:

i'm a quaker...but what does that mean? i wonder the same thing sometimes. i got to go to the world gathering of young friends 2005 in lancaster, england--very cool! (see the website, www.wgyf.org.) there were so many awesome people there, and i was so crazy-busy i didn't get to talk to most of them in half as much depth as i would have liked. but the basic thing i think most people noticed about the world gathering was that there is so much diversity in quakerism.

so to define myself within the quaker realm...i'm a birthright friend, grew up in oregon. i attended an unaffiliated unprogrammed meeting until i was 11, then a programmed meeting (part of evangelical friends int'l) until this year, and now i moved to new jersey for seminary and i'm going to an unprogrammed meeting (friends general conference/friends united meeting). if i could choose which branch of friends to be part of i think i'd be a conservative friend--because they have unprogrammed meetings (unlike efi/most of fum) and they try to stay pretty close to the vision of early friends, even that crazy jesus character (unlike most of fgc). so i'm kind of this amalgam of all of them, finding truth and goodness, as well as not-so-goodness, in each branch.

then there's the question--a quaker, attending seminary??? what is this world coming to? and a theologically "reformed" one at that...

it's this whole "reformed" theology which has got me blogging. i think i'm the only quaker here, so i get a little protestanted-out sometimes. (i think of quakers as protestants to the protestants.) anyway, so right now i'm taking a systematic theology class, and it's very interesting, challenging my own theological assumptions (like, y'know, that God can speak to anyone, anytime, and does do so on a regular basis...that the Spirit keeps revealing stuff to us if we pay attention...just "little" stuff like that...) so i'm thinking i'll use this blog as a space to process and try to articulate what i'm learning, and what about it rubs my quaker sensibility wrong.

why the title of the blog, you ask? well, i like quaker oats, as my husband will tell you--i eat them most mornings for breakfast. (by the way, does anyone know if it's true that the guy on the box is ben franklin, not a quaker at all? i've heard that but don't know if it's just an urban legend or what.) plus, right now i'm taking hebrew, and there's a hebrew word that sounds like "oat" which means "sign or mark," so i always remember it because oats are a "sign or mark" of my breakfast! so this blog (and tons of other great quaker ones out there i just found while procrastinating from homework) is a "sign or mark" that quakers are still alive...and (pacifistically speaking) still kicking--at least on the web.
Posted by Unknown at 7:28 PM 3 comments: