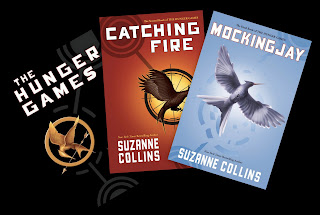 I jumped on the bandwagon. I had emphatically decided I wasn't going to jump on this one, due to what I'd heard about the books' theme of children killing children in a Roman arena-like setting. I didn't want to support that. Even when I heard that the hero is actually a heroin and even when several of my friends read it and liked it. I also kept hearing stories on NPR, of all places, in the weeks leading up to the release of the first film: about the explosive popularity of the sport of archery, especially among girls; about women archers training for the summer Olympics; and of course buzz about the movie. (Warning: if you haven't read these books and plan to, go read the books first so I don't spoil anything for you!)

Then my husband threatened to go see the movie with or without me.

OK, OK, I'll go see it with you--but wait till I've had time to read the book first!

That was on a Saturday night. We watched the movie two days later on Monday night. And I'd finished the first book that afternoon, between taking care of kiddos (mine and my niece), prepping for and giving a lecture, doing my normal Sunday routine including meeting and an evening worship group which we hosted and for whom I made dinner. I got the whole trilogy on Kindle, which meant a) I didn't have to wait to buy the book at a store or have it sent to me, and b) I got the whole trilogy, which meant that immediately after I finished the first book I wanted to dive into the second book! I tried to show a little more restraint on the second one, but I started it Tuesday and finished it Thursday that same week. That's when I put my foot down and decided that I had to save the third book for the end of the semester, after I'd finished all my grading.

So as you might have guessed, I found these books extremely addicting, in a good way. I don't know that there's anything particularly amazing about the writing style in itself, but the story is compelling and the plot development is excellent. It's told in the first person from the perspective of the heroin, Katniss Everdeen. (Katniss is a cool name, by the way! If I had a daughter, and if I didn't think that name will soon become too popular, I'd totally name her that.) The world in which the Hunger Games books are set is a dystopian version of the future United States. It's no longer the United States, but it's set in the land where the USA is now. The government reminds me of the one in 1984: a centralized government  that has eyes and ears everywhere due to technology as well as human informants; theme of escape to the wilderness for respite; attempted control of the people via specific work assignments not based on aptitude but on location, etc. In The Hunger Games, the government is run from "The Capitol," and there are (or were) 13 districts, each in charge of certain things needed: agriculture, coal, weaponry, seafood and so forth. Each year they have what's called "the Hunger Games," where two contestants are chosen at random from each district to fight to the death in a human-made arena, but it's made to look natural (i.e., it's in a forest or whatever). Thinking about these Games defines the lives of most in the Districts (and in the Capitol): teenagers can get extra food for their families if they put their name in more times for the lottery. Watching the Hunger Games on TV is mandatory for all. In this way, the Capitol keeps its subjects...subjects.

Obviously, Katniss ends up in the Hunger Games. If you've read it, you know how--if not, go read it. The author, Suzanne Collins, created an interesting world where the contenders in the Games have to play to the crowd in order to have a chance at winning. As a reader you end up hating the people from the Capitol--but there's that point in the story where you have to realize, "As an American, I'm from the Capitol." We watch other people's struggles for existence on TV, and if their story captures our imagination it's possible that we'll send little gifts into the "arena" of life to give a little edge over competitors. This is "entertainment" for us and nothing more. As a middle class, educated American, I can spend my life learning about wars and conflicts, perhaps, and I may be genuinely sad when favorite "contenders" die, but I move on, happily raising my kids in this safe zone where they'll never have to fear becoming a contender in the real-life (life-or-death) Hunger Games.

And then there's the issue of politics and "spin." Katniss recognizes she's being used as a peon in a political game by everyone possible, and she (rightly) resents this. First she's used by the politicians of the Capitol to continue their game of subjugation through fear and degradation of the human spirit. When she later becomes the symbol of the rebellion of the Districts against the Capitol, she realizes she's being used again. She's willing to be used as a symbol--but only so long as this symbol is a rallying point for changing the political landscape into something that is more fair and equitable for all. When she realizes the politicians of the new order are going to reinstate the Hunger Games against the people of the Capitol (and several other inklings before this), she can't stand it anymore. She knows the political system that is going to be put in place will have exactly the same result as the former government did. The people at the top will be different, but there will be a "top" and there will be a "bottom." The system will remain the same, though the individuals will be shuffled around a bit.

This is what it feels like in our country right now. I vote, but I vote without a clear conscience. I vote for the least of two (or more) evils; I vote because I think this is the best system we human beings have thus far come up with--but I think this system is broken. Or maybe it's us who are broken--maybe it's me. We're so broken that it really doesn't matter which party is in power; we're going to bomb Iraq, Afghanistan and who-knows-how-many other countries almost daily. We're so broken that most politicians in both parties are cozy with Wall Street tycoons, special interests and lobbyists. We're so broken that if you get down beneath the rhetoric of most politicians, everything they do seems just about the same.

I believe there are good people in positions of political office, but we and the other lawmakers are making it pretty much impossible for them to get anything done that is actually good for anyone (or anything). We demand that they not change their mind, that they hold an extreme viewpoint on everything (either extreme right or left), and this makes it so no legislation can pass--and if it does, it's bogged down in loopholes or special interests. It doesn't matter who's in power--these things occur.

This brings me back to the Hunger Games. I guess I'm excited to see if this book catapults us into thinking about government differently. Can we see ourselves in the people of the Capitol? Can we see the obvious critique in the text of a simple change of hands of the same old power? Can we begin some kind of revolution to change what's going on--and do it in a way that will usher in something truly different rather than more of the same? Will Friends lead this charge, or back off until it becomes trendy?
Posted by Unknown at 2:16 AM

Thank you, THANK YOU for seeing that the US is "The Capital". I thought I was the only one. I wanted to tell the world during the height of the movie hype, but I couldn't have said it better than you. Thanks!

I completely agree with you. Snow's government is fascist and Coin's is communist . Keep in mind that we are not the only Capitol. It's any rich country in the 1st world.

You may want to watch Oliver Stone's Untold History of the United States.