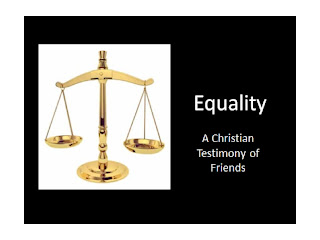 Here in Northwest Yearly Meeting you'll sometimes hear people describe the Friends' peculiar stances on things as "distinctives." I thought this was normal until I was speaking to Friends in Boston and someone told me they knew to which branch of Friends I belonged because I referred to the Friends testimonies as "distinctives."

In meeting for worship the other day, Paul Anderson spoke about the testimony of equality, and said something really helpful regarding the meaning of "testimonies" and "distinctives." (You can find that message on our meeting's podcast here.) He said that the testimonies are all Christian testimonies--meaning they are found in the Bible (although one can practice them without being "Christian").  Testimonies are for all time. They are things that are a good idea for all people, everywhere. These are things like equality of all people, living peaceably and doing intentional reconciliation work as needed, fostering community, etc.

"Distinctives," on the other hand, are the particular way we each (or each generation) feel led to live these things out. So where the testimony of good stewardship, for example, might be a good idea for all times and all people, the "distinctive" of Friends today might be aimed toward stewardship of the environment, because that is the area with which our particular time and place struggles. Likewise, the testimony of equality is important for everyone, but during the nineteenth century in the United States, Friends lived this out distinctly by advocating for abolition of slavery and the right of women to vote, among other things. I really liked this way of defining these two terms and I thought it was helpful, so I thought I'd pass it along.
Posted by Unknown at 7:00 AM 3 comments: 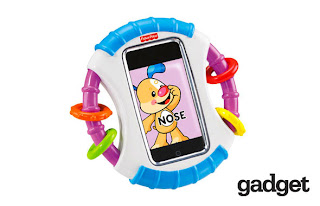 The other day, my two sons (one is 5 years old and the other is 14 months) and my niece (also 5 years old) were arguing over who got to play with the two dead phones we have lying around the house to be used as toys. (We also have two actual toy phones, but those aren't as exciting as the "real" ones!) Everyone wanted the old flip phone, but I handed an old cordless wall phone to my niece while she was waiting for her turn with the flip phone. She said, "No, I don't want that one--it doesn't have a screen." (The picture at right is of a teething ring you can put your iPhone into so your baby can be entertained and soothed with an iPhone app. Yikes!)

This tells me something about myself, for sure, and my parenting/aunt-ing, but it also makes me wonder about how we help kids to engage with life in ways other than through screens. It's probably important for kids to be computer-literate--that will certainly be important (barring some sort of apocalyptic-style event that wipes out all technology) in future school and jobs. But I think beyond that it's important kids can function without a screen--that they can play creatively, learn to self-soothe and be able to be still.

A friend of mine who is also a Friend and a psychiatrist, Doreen Dodgen Magee, has done a lot of research on the topic of kids and technology. She emphasizes the importance of allowing kids to be bored sometimes. This develops creativity, self-control and awareness of self and self-in-relationship. I think this is so important! (Doreen is an excellent speaker, by the way--she gives talks to parents and professionals on kids and technology, as well as parenting in general.)

At this point we limit our 5-year-old's screen time to half an hour on most days (unless it's a special occasion of some sort or we let him watch a full-length movie or something). This includes video/computer games, games on phones, his V-Reader, anything on the computer, and of course TV and movies. This is a definite challenge already! I'm not sure we should even let him have half an hour per day, but it's hard when he sees us using screens all the time. The problem is, his brain is still developing, and we want it to develop well.

Doreen talked about a study that's been done on 3- to 5-year-olds since the 1960s where they are given a marshmallow, and the adult says, "I'm going to leave for a couple minutes. When I come back, if you haven't eaten the marshmallow, I'll give you another one." In the '60s, about 90% of the kids would wait and get two marshmallows. Today it's less than 5%. Another study found that kids in the '60s could stand still when told for about 3 minutes; today kids average zero seconds. ZERO SECONDS! They do not know how to stand still. These show how little self-control kids are being taught, and how few of them even begin to understand the concept of delayed gratification. (Here's an article from NPR on this study, although it's a few years old.)

I'll brag on my own kid for a minute: at Christmas we gave him some various kinds of candy and gum in his stocking, and said he could keep it and decide when he wanted to eat it. (Previously we've always had control of the candy, putting it on top of the fridge and doling it out when there's a particular reason to celebrate.) He still has some of the candy and gum left! And it wasn't like we gave him copious amounts of it. So I guess he knows a little bit about self-control and delayed gratification.

Something convicting to me is that I have to be willing to be bored sometimes myself--or, if not exactly bored, to be fine with "doing nothing," which really isn't boring once you get into it. I have to have self-control and exercise delayed gratification. I have to be willing to not always be entertained; I have to be willing to be creative and find things to do that don't require screens. (Currently I'm being creative on a screen, so I'm not sure exactly where that falls.) Part of this, as a Friend, comes through being still: learning to take space to just be, and to intentionally commune with God without the distraction of a screen. Sure, God can and does speak to us through screens, but I'm suspicious that we'll be more aware of how God is working if we spend some of our lives without focusing on a screen.

Doreen told me about a study done at Stanford on meditation, as well as some really helpful work done at UCLA. (Here's a website about the Stanford study, and here's a download of the findings. UCLA's Mindfulness Awareness Research Center website has some excellent information, research and even classes you can take online about "mindfulness." There are tools you can use in doing "mindfulness" or meditation practices. There is research on using "mindfulness awareness" with kids with ADHD, and other research on kids and mindfulness.) The Stanford study found that doing meditation 10 minutes/day (or 3x/day for 3 minutes) significantly increases one's ability to be compassionate. So maybe if we can all tear ourselves away from our screens for just 10 minutes a day, and teach our kids to do the same, the world will be a better place.
Posted by Unknown at 7:00 AM 1 comment:

"rhythms of the inner life" now an e-book! 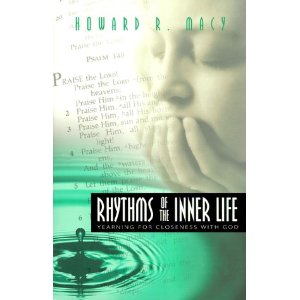 Rhythms of the Inner Life is a great book by f/Friend Howard Macy. It's been available on paper for a while, but it just came out as an e-book! Check it out, it's only $3.99, and well worth it.


Howard explores the Psalms as a way of helping us understand the rhythms of our own inner lives, focusing on seven ways we connect with God, as witnessed in the Psalms: longing, waiting, trembling, despairing, resting, conversing and celebrating.


Although this book wasn't written just for Quakers, it speaks with Quaker sensibility, inviting us to meditate on the ways we interact with God, and encouraging us to not just think about it but to actually do it. There are also some group (or individual) study questions, so you could use it with a small group or a worship group. The study guide has suggested readings from the Psalms and the New Testament, suggested hymns based on the Psalms and questions for discussion or personal pondering.
Posted by Unknown at 7:00 AM No comments:

how do we vote with integrity? 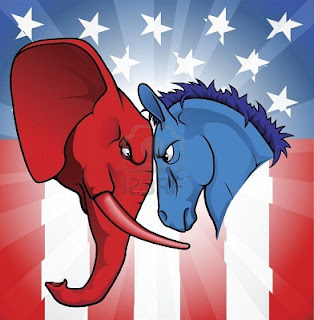 We just finished a special election here in Oregon to replace a congressperson with less-than-stellar integrity (although he wasn't a bad politician, really). I heard a sort of debate between the two main-party candidates on NPR before the election, and I came to the conclusion that neither of them was really a candidate that represented me, although one was worse than the other. When I looked in the voting pamphlet to see if there were any good third-party candidates, there weren't. (There were other candidates but they weren't good options.)

Since it's an election year, this problem is bound to come up again, and it's something I think about a lot. What do we do, as Friends, when either a) there aren't any good candidates, or b) the good candidates have no chance of winning, and if we vote for them, the worse candidates are likely to get elected instead of the not-quite-as-bad? 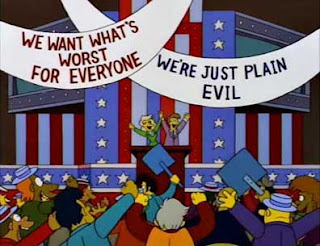 In this case, I voted for the not-quite-as-bad. I'm not excited about that candidate's qualities, but I would much rather have that person win than the other one. Is this giving in to evil in some way, or is this just being human? There's never going to be a perfect candidate, right? (Unless I run for office, of course--in which case I would agree with all of my own policies and therefore I would be perfect...I've thought about running for president in 2016 because it's the first election year I'll be old enough to be president, so if you need a write-in option, remember, Cherice 2016!)

So, I'm kind of resigned to the fact that there's never really going to be a perfect option, because anyone who actually makes it anywhere in politics is too rich and has probably compromised their integrity too many times to be trustworthy. This is rather cynical, I'll admit--but I don't think that makes it untrue, unfortunately. But if there's a candidate that's half-way decent, like Dennis Kucinich, although I'm sure he's not perfect, should we vote for him, as Friends, since he's anti-war, even though we know he'll never win? Do we vote symbolically, hoping our votes will make a difference someday? Or does that just make the current situation worse, because then the absolutely worst candidates end up winning because a vote for the "good" guys is split up?

How do others of you vote with integrity?
Posted by Unknown at 7:00 AM 10 comments:

I thought I'd start by referring you to a new article that came out in January in the journal Quaker Religious Thought. My article is called "Romans 12:17-13:10 & Quakers' Relationship to the State." It's a brief version of my master's thesis work on this subject. Unfortunately there is no online version of this journal, but hopefully your meeting subscribes to it and it's available in your meetinghouse library! You could also probably find it by going to the library of a Christian university or seminary in your area.

The QRT is a great journal with interesting and well-written pieces every time. You can subscribe to it by writing to the Religious Studies Department at George Fox University ($16/year).
Posted by Unknown at 7:00 AM No comments: