I have quite a bit of time to read these days while I sit around and feed my son--practically half my day is taken up this way! I've read a bunch of novels and such, and decided I was ready to move on to something a little more enlightening. (Not that novels can't be enlightening, but I didn't have a whole lot on hand that were particularly enlightening, mostly just entertaining.) So I decided to read George Fox's Journal. I've read an abridged version before, but never the entire 760 pages (plus three prefaces and forwards)!

The first thing that stood out to me was in William Penn's preface, where he says, "They would have had every man independent, that as he had the principle in himself, he should only stand and fall to that and nobody else, not considering that the principle is one in all." (Excuse the androcentric language.) He's saying this as a negative thing, of those who opposed Fox and the early Friends.

I found this quote interesting, considering the way Quakerism is sometimes interpreted today. We tend to interpret the "inner light" as something very individualized: my inner light tells me how to live, what to share in meeting for worship, etc. But Penn seems to be insinuating that we are NOT independent--and I tend to agree with him. I think if we all reflected we would probably agree with Penn, but it's not always how we live. Quakerism is, at best, a communal faith. I have an inner light, but it isn't worth much except in the places where our inner light guides us to the same thing as a community, or at least into listening to one another in genuine love when we can't agree. The point is that this inner light is Christ, as Fox is very adamant about. Christ wouldn't tell one of us one thing and another something else. As we listen, we find that "the principle is one in all," that we all can hear God, but we often need honing by one another's listening.
Posted by Unknown at 12:35 AM 2 comments:

It's been a big couple of weeks. Two weekends ago we had three baby showers, and then the next day I went into labor, and our son Espen Paul was born on February 1! It was 5:11am, and he was 7 lbs 12 oz, 20 inches. He's amazingly cute. And fun, although mostly just eats, sleeps and poops right now, and makes funny little squeaking noises, and sounds like a goat when he cries really hard. 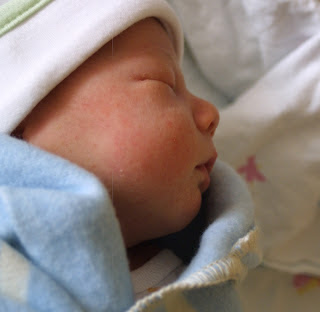 But the reason for the title of this blog is that I am sincerely and utterly grateful for the community we're a part of! We have felt incredibly blessed in the last couple of weeks, from the generosity of our friends and relatives to help us get all the baby supplies we need at showers, to the visitors in the hospital and at home, to the people who have been bringing us meals, to those who call or email with encouraging words. It's so great to be part of this family, both literal and spiritual, to know that people care about us and are praying for us when we're going through new and sometimes difficult experiences. I can't express in words the gratefulness that I feel to all these people, and for the fact that I've been raised in a community that expresses love and care so palpably. I'm excited to raise Espen in this community, too. 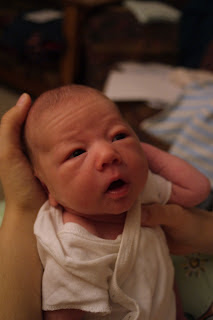