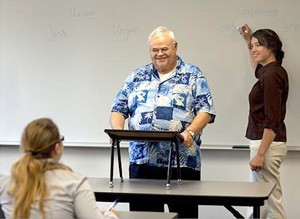 My grandpa, Ralph Beebe, and I are "famous" this week! We're teaching a class together at George Fox University. There are articles about us in the Newberg Graphic and the George Fox alumni magazine, the Journal. My husband, Joel, took the photos, as well as many photos for other stories in the Journal. It's been fun and a privilege teaching with my grandpa! We're teaching "War & Conscience in US History." He says he's the war part and I'm the conscience. (He's a history professor emeritus, and I'm doing the part on morality and theology.)
Posted by Unknown at 2:20 PM 1 comment: 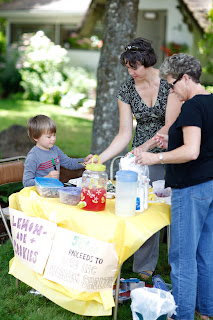 One Saturday this summer my 4-year-old son hosted a lemonade stand. This wasn't your little capitalist-entrepreneur-lemonade-stand, however; here's the story. 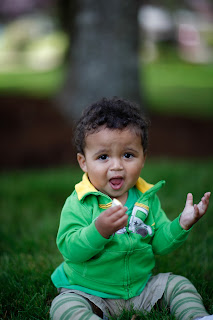 We were driving home from the grocery store one day and saw a homeless man sitting by the road with a cardboard sign. My son asked what he was doing there. So far this story is similar to one that happened last year and that I talked about here. In that story we gave the man a sack lunch, and my then-three-year-old son kept asking me, "But Mom, what else are we going to do?"

This time, we brainstormed what else a 4-year-old can do to help people who don't have homes. We talked about how people without homes need a place to stay, and that takes money and organization. I told him about a homeless shelter we have in our town and we talked about raising money for that shelter. We discussed ways that he could try to raise money, and he chose doing a lemonade stand. 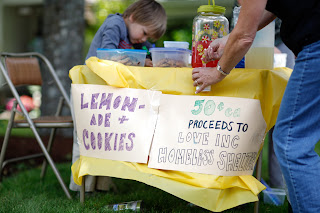 For the several days before, he was SO excited! He told everyone he met that he was going to have a lemonade stand that weekend. I thought maybe he would forget about it, but he kept bringing it up and pestering me about it, so we did indeed have a lemonade stand! It threatened to rain, but it ended up being nice enough that people weren't freezing, drinking their lemonade. We had pink lemonade and regular lemonade, with a garnish of lemons and raspberries. We also had oatmeal chocolate chip cookies from my grandma's recipe. We charge 50 cents per cup and per cookie, and we advertised using our church's e-group, as well as signs on the fairly major road on which we had the stand. Many of our friends and family came by and supported E and the homeless shelter, and some who were just driving by stopped for some refreshment. 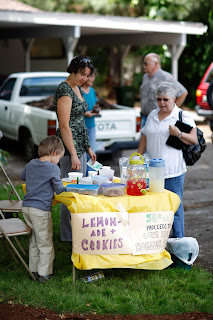 E had a blast! He's quite the little extrovert so he was in his element. In all we raised just over $150. We took it to the shelter and he got to see what it looks like and learn about it a little bit. He also got a little story in their newsletter! You can read it here (as well as a story about NWYM's service project there at Youth Yearly Meeting).

Although this wasn't really a huge, world-changing thing, I felt like it was great to give him a sense of empowerment that he could do SOMEthing, even though he wasn't changing the whole system. Hopefully he, and I, learned that we don't have to be immobilized by the massiveness of the problem, but we can do our part, and trust that others will do theirs, too, and that God will multiply our efforts.
Posted by Unknown at 12:16 AM No comments:

quakers in the US & latino/as

You all know that I love my Quaker denomination...but one of my main criticisms of our denomination in the United States is how white we are. Now, my meeting has a fair deal of racial "diversity," but this mainly comes from people adopting kids of various races. We have pretty much no ethnic diversity. You've probably heard the statement that "Sunday morning is the most segregated time in America," and there are both positives and negatives to this: we worship with a community of people among whom we feel welcome and with whom we can get along well enough to have a chance at being a functioning church. But there are also negatives: we may get so enmeshed in our little community that we don't know what other populations experience. People may feel out of place and unwelcome in a congregation with a majority of people of a race or ethnicity other than their own. We don't really have to work on loving people when we'll only worship with people who are like "us," and we split our denominations if there are eventually enough "not us" so that we don't feel comfortable.

Many churches in the United States are dying, and I wonder if this has something to do with it. I'm not the first to note that churches often seem like just another social club--a place you go be with people with a shared interest, like a soccer team or a country club. There is a wide variety of other places to go to fill the "club" need in one's life, so church becomes less and less important. People believe in God, and many people in the United States even say the like Jesus, they just don't see a reason to go to church. I wonder if it's because we don't display the kind of love that breaks down the barriers erected by our society, such as race, ethnicity and social class.

This story on NPR a couple weeks ago caught my interest. It's about Hispanics in the United States, and how they often do not remain Catholic as second generation immigrants and beyond. They are choosing evangelical denominations that are more "boisterous," as the story put it.

In my own Yearly Meeting (NWYM), much of our "growth," or perhaps our lack of decline (in terms of numbers), comes from the addition of Latino/a meetings. In some cases these are Latinos who learn about Friends and want to partner with us in creating meetings with Spanish as the main language. In other cases, it's a group of Latinos who get together and form a church and need a place to meet and somehow stumble on a Friends meetinghouse. Now we have a Latino Ministry Coordinator and a committee that focuses on Latino Ministries. This is great in some ways, but still fairly segregated. Some of this is because of language, some is because of ethnicity, and some, I think, is due to differences in how we interpret the Bible and what is important about being "Friends."

I've noticed that over the years, Friends have had a hard time in the US and Europe attracting people of other races. Is this because of our manner of worshiping, which is a far cry from "boisterous"? Is this because we're racist no matter how hard we try? Are we just another social club with a shared interest and our own "language" (just like fans of a certain team or sport)? Even when Friends were some of the main voices for anti-slavery we didn't manage to attract many African Americans to our meetings. Now, although we have many Latino Friends meetings, they aren't often very connected to what's going on with the rest of their Yearly Meeting or with Friends on a larger scale.

So, what do you think we should do about this? There are several options, as I see it:

1. Don't worry about it. Let Latino/a Americans choose the denomination that best fits them. This also includes not worrying about our own declining numbers or our latent racism/ethnocentrism.

2. Change our styles of worship so that we're more appealing to Latino/as and other "minorities."

3. Everyone learn Spanish! Combine worship services with those that are already going and encourage other meetings to incorporate Spanish- and English-speakers into our services. Creatively work with leaders from both communities to make the worship time welcoming to everyone.

5. Pay more attention to immigration issues and build relationships with Latino/as in a more natural way, a way that supports a major struggle of their community, and in so doing, encourage more Latino/as to become Friends because of our emphasis on social justice.

Other ideas? Thoughts?
Posted by Unknown at 5:18 PM 1 comment: