us vs john lennon

I just watched the movie "US vs John Lennon" with a group from my meeting. It's a documentary about Lennon's (and Yoko's) political activism, and it was very interesting and well done.

It left me feeling somewhat hopeful and somewhat depressed, which I think is generally the state I'm in regarding peace activism in general these days. I'm hopeful that some people will catch on, but depressed that even in the '60s and '70s when peace was popular, it's hard to see the good it did in changing American policy or who's in power. And now it's depressing to see a majority of that generation--those now in their fifties and sixties--living like normal Americans. Did they lose hope? Did they become disillusioned? Did they fall in step with The Man and give in? Did they lose all their leaders to political assassination???

And it's also depressing to see my own generation, which hasn't even paused to "Give peace a chance."

And although it's really cool to see how John & Yoko's clever use of media brought the idea of peace to a whole generation, it's depressing to see how media is used today to speak the language of worldly power and fear. We don't see what is happening in Iraq like they saw Vietnam. People aren't beaten and arrested at protests because that would be something to report. Instead protests are a non-event, evoking no news accounts. Pop stars who speak out for causes are seen as one more rich person with too much time on their hands trying to get publicity.

There's hope, too--I mean, look at all those people who assembled and wanted to work for peace! Look at the hope in their eyes, listen to the cry for a revolution that seeks justice nonviolently for the oppressed! This is the desire of our hearts, if we only listen to it. This is the desire of the hearts of so many, and it's already here if we believe it. Like the posters John & Yoko put up: 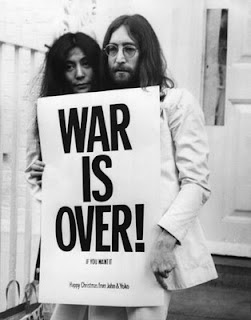 So you say you want a revolution? Who's going to lead us? It's a dangerous job...it's not comfortable and it takes creativity and you might get crucified or shot. I don't know. It's not going to be me. But I'll follow you if you start one!

It takes bravery, creativity, mental strength, and persistence to follow the road not taken. But once you commit yourself to following your values instead of the worn path, you wonder how you could possibly have considered traveling any other way. And just by living your life following your values, you have become a leader. Others will eventually see the light and follow. This is evolution, peaceful revolution. I feel that peaceful change toward the good life has been gradually occurring ever since the 60's. More and more people realized that violent change will never accomplish anything and many decided that change within the system wasn't possible. They "dropped out" to live their values and I think many of their children have carried on those values. Things may appear bleak now but that is only superficial. Beneath the surface is a flower waiting for spring. The darkest hour is just before the dawn. I have faith that progress have been made below the radar screen. We only need to believe that we are still following the road to Eden and we will eventually arrive there.

You may also want to check out this book which touches on similar themes.

As someone who was old enough to be drafted, and to vote, in the Viet Nam years — I talked with an awful lot of my age-mates about the issue, and I have to say, while nearly all of them were against that particular war, virtually none of them were pacifists. Their real objections were (a) that they were unconvinced that particular war was necessary and (b) they didn't want to get shot at.
So it really wasn't "back when peace was popular" any more than peace is popular today.

I also did not have the impression that "John & Yoko's clever use of media brought the idea of peace to a whole generation". J&Y were following the trend, not creating it. My personal impression (shared by many other people besides myself) was that a good deal more credit for the prevailing anti-war sentiment belonged to the newsmedia, which put really ugly photos of injured and killed soldiers and civilians on the front pages and the evening TV almost every day, year after year. This did a tremendous amount to help persuade young men that they didn't want to risk their own bodies in Viet Nam. I've read that, by the final year of the conflict, 90% of those who registered for the draft were requesting conscientious-objector status, and I've heard that this was a major factor in the calculations that led Nixon to keep his campaign pledge to get the U.S. out of Viet Nam.

Alas, nowadays the media have a deal with the Bush administration not to publish ugly war photos any more. Any publication or news channel that breaks that agreement is excluded both from the combat zones and from Pentagon press releases — a penalty no publisher or media owner is willing to endure.