overnight in a cave

I adapted this post from an article another Christian Peacemaker Teams group member (Brooke) wrote and sent out to be shared with others about the delegation while we were there. The pictures are mine (or others' taken on my camera!) 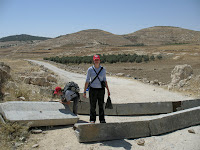 One night four members of the delegation had the opportunity to travel away from the village of At-Tuwani to remote villages in the South Hebron Hills. (The picture is of me at the road block that keeps villagers from traveling to larger Palestinian towns...and Ross in the background apparently attempting to move the road block.) CPT has a presence in At Tuwani, and also provides accompaniment and outside observation when requested by other outlying villages. 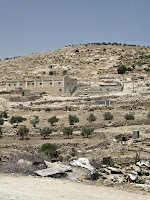 At Tuwani is kind of the hub of 8 small villages, with the next real Palestinian town being Yatta. The elementary school for these villages is in At Tuwani, and is pictured at right. 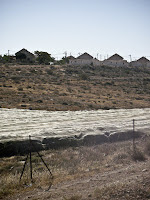 Near these villages is the Israeli settlement of Maon. This settlement (pictured left) has all the modern conveniences, including an Israeli-only highway leading to it. It is within sight of At Tuwani and some of the other villages. The settlement also has an outpost (pictured right and below), which is an expansion of the settlement onto the next hill. 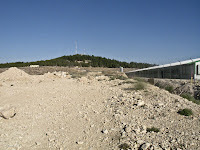 This is how the settlements grow: they take over one hilltop and attack anyone who gets near, even if that land has traditionally been used for grazing a specific family's sheep. Then a settler family moves to the top of the next hill, creating an outpost. Services (electricity, water, etc.) are extended to this outpost and more families move there--or more buildings are built. I heard that in Maon there are only a handful of people who actually live there full-time, while many other families use their home as a weekend get-away or a the equivalent of a summer home. 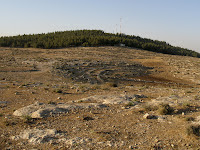 Also, sometimes buildings are built or caravans (mobile homes) are brought there to make "facts on the ground," to show there is a higher settler population than there actually is, so that international law will not make settlers move off this land that they now "occupy," even though it is illegal according to the UN (as well as Israeli law!)

Anyway, two members of the delegation stayed with a family in the village of Tuba, and Brooke and I stayed in the village of Maghayir Al Beed. These are small villages comprised of no more than 50 people each, and the houses are in old caves built into the side of the mountains. Most of these caves have been inhabited by the same families since the Ottoman Empire.

CPT's relationship with the villagers came about because the settlers closed the road that connects Tuba and Maghayir Al Beed with Tuwani because it runs between the settlement and the outpost. 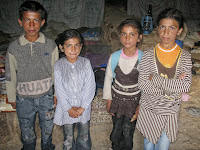 In order for children to get to school in At Tuwani they have to either walk the short way that goes by the settlers (who have attacked the children in the past), which takes 20 minutes, or walk a route that takes two hours through steep hills. To solve the problem an agreement was made so that soldiers in the Israeli Defense Force escort the children through the short road and CPT members watch from both ends of the road by the settlement to make sure the children are safe. (This road is currently closed to all other traffic for the "security" of the settlers.)

One family in Maghayir Al Beed is Shanti's family. They are a family of twelve: nine children, parents and a grandmother. 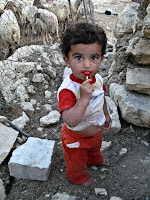 They live in a small cave and make money shepherding and making cheese. We were welcomed lavishly by this family and almost immediately made connections with them (although our CPT team member-interpreter, Josh, was not yet present) by cooing over their baby and communicating with our limited language skills in one another's language. I showed them a picture of my baby (and my husband), and we figured out later, once Josh was there to translate for us, that my son is just about the same age as their youngest daughter. This was an important bonding point for us with the family, especially the mother. 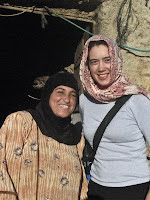 We sat down on cushions on the floor of their cave. 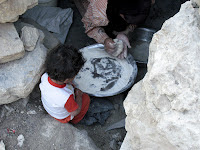 One of the girls poured warm water over our hands, and then we received an amazing meal consisting of a cheese, rice and tomato soup; stuffed zuchhini; chicken and taboun (flat bread). It was a little strange because we were all sitting around in a circle--Shanti, Josh, Brooke and I eating, and the grandmother 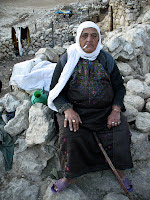 eating some and somewhat included in conversation, and then the mother and all the kids sitting further back and not eating with us. I just hope they ate earlier, because we didn't see them eating anything! We asked Shanti about his experience living that close to the settlers, and he told us his family's story. We asked Josh to ask the mother what her thoughts were, and at first Shanti answered for her. Then Josh asked him if we could ask his wife a question, so that seemed to work--rather than a man asking a woman a question it was women asking her through a translator. It was good to hear her voice and to be able to learn her perspective as well. (The picture is of her making taboun in their hand-made rock oven with the baby looking on.)

Shanti told us that two years ago they built an outhouse and the army said they had to knock it down because they didn't have a permit to build it. Permits for building are nearly impossible for Palestinians to get. When the army came to knock the outhouse down Shahadi told them that the family needs an outhouse for all guests who come to stay including Israelis. The army ended up knocking down the outhouse with a tractor. (The picture is of the demolished outhouse. Josh and Shanti slept on its roof, which is now next to the outbuilding on the ground.) The army wants to demolish the family's cave home because it doesn't have a building permit! (It makes perfect sense to have to have a building permit for a natural cave, doesn't it???) They tell him to move to Yatta but they can't afford to move there: the family's livelihood is their sheep, the cheese and wool they produce. Selling hte sheep would not provide the income a family their size would need to live in a city, and jobs are nearly nonexistent in Palestinian towns. The soldiers don't seem to understand this.

The settlers and the family have had some difficult interactions. Two months ago two of their goats were killed by settlers, and 5 years ago some of their sheep were beaten by settlers. 3 years ago settlers stole 15 goats and when he complained about this the high court said that he couldn't have them back, so he lost $4500 (American). On another occasion his mother was at the well drawing water and settlers were walking across his land. His mother said to them that she didn't like them on their land and they shot her. She went to the hospital, but he didn't have the money to pay for it.
Lastly, settlers have blocked the road so it is a very long way to Yatta. When he complained about this to the police he was arrested for 10 days. 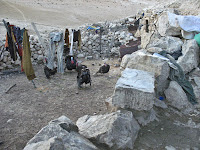 In the village all the homes are old. They are too small to hold the families, but they can't build on to them because construction is forbidden due to inability to gain permits. Many of the caves are also collapsing and need work and reinforcement. 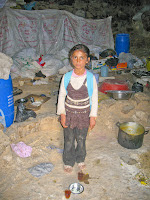 Shanti's family cave leaks in the winter and they are afraid it may collapse. They cannot do the necessary repairs because of the permit situation and if they did do the repairs the caves would be demolished. In the end, says Shanti, the Israeli District Coordinating Officer wants all the caves to be uninhabitable so that they can condemn the village and give the land to settlers.

For Shanti and his family, the current situation for making a living is this: during the most recent rain period there was barely any rain, and so there isn't any forage for the sheep. It costs $500 (American) for one ton of food, which lasts for 4 days. 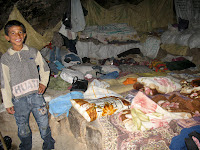 If I was in this situation I can imagine myself being incredibly frustrated, but this family still has hope. They are committed to nonviolent action, working with CPT and with the people of other villages to combat this injustice in ways that will effect change. The day after the settlers shot and killed two of his sheep, all the villagers grazed on that hillside so that their sheep covered the area. 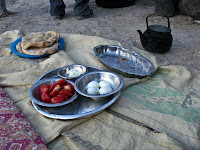 They refused to let the settlers push them out of the area using scare tactics. They invite us into their home in hopes that our presence will help bring their story to the world. And in the morning we had another wonderful traditional meal!

Many, many families have already moved out of the area because of threats by the settlers. Now they are refugees in Yatta and other towns. Where will it end? 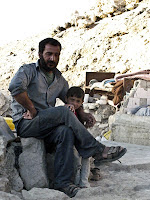 Hopefully it will end with a group of brave souls like Shanti and his family standing firm, nonviolently defending their right to their own land. Hopefully the world community will see the injustice occurring and act in ways that no longer support injustice, but support rights for all people. Young children should not have to be afraid to walk to school, and no one should have to fear the demolition of a house that has been lived in by their families for generations--demolition by fixable repair or bulldozer.
Posted by Unknown at 11:29 PM

Cherice, you have some marvelous insights. I will comment more later, when I have time to read more thoroughly.

My lone thought tonight is of one day when I watched a group of Jewish children going from one place to another in the Jewish section of the Old City. In front and in the rear were adults armed with, I think, AK-47's. I thought how sad it was to have so much fear. I wondered, though, if part of it was to place solidly in the children's minds the Jewish sense that they are a victimized people who, because of their centuries of being the objects of persecution, have a sense of entitlement that makes it easier for them to believe they are God's special people who took an exodus from Europe in the 20th Century and have arrived at their God-given promised land. Perhaps they feel justified in going far beyond what most people would think is morally acceptable, since they feel it is their right/obligation to defend themselves against any who would object to their taking the land God has given them.