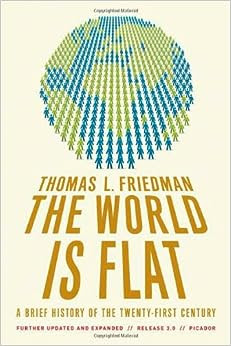 I must admit that I only got to chapter 5 out of 17 of The World is Flat by Thomas L. Friedman. This one has been on my bookshelf for about 8 years since my husband read it for a college course, and so when I saw it as an audiobook from my library, I thought I might as well listen to it. I understood the premise already: due to globalization, there isn't the same kind of siloing of information or economic possibilities as there used to be. Since we have the Internets and easily accessible phone service, etc., many people around the world have access to similar jobs, products, services, and opportunities. What used to have to be done in-house can now be parceled out and outsourced.

While I think the premise is true, I was not interested enough in the book to continue listening to it through to the end. Maybe it got better; I probably will never know. I have two main problems with the book: first, it was kind of boring because this version (I think it's the 3rd edition) was written in 2007, and most of it is very outdated. His predictions about technology have already happened and are now old hat. It's kind of interesting reflecting on how much has changed in the last 8 years and how quickly this has become "normal," but other than that, I didn't find it interesting.

Second, Friedman seems to give this a fairly unqualified positive spin. Globalization is a good thing to him; this flattening of the economy, though scary in some ways because of the loss in the USA of certain types of jobs, is overall positive because it frees "us" up to do more interesting jobs that are higher up the ladder of creativity so we don't have to deal with menial labor, data entry, and the like. In my opinion, this doesn't seem to be true, and even if it was, it's still troubling. Basically what he's saying is not so much that the world is flat, but that the hierarchy has expanded. Now the hierarchy has a broader base from which to pull, so it feels like it's flatter to those of us in the middle classes because there are more of us in a similar range (see pyramid at right). But what the book fails to realize is the extreme pointy-ness of the world, in actuality, a fact that the Occupy movement attempted to help us recognize. There are more people competing for middle class jobs. We've sent many of them overseas, but rather than allowing Americans to have better jobs, it actually seems to mean there are often fewer jobs that provide a living wage. We are either highly skilled and can find a good paying job, or we work in the service industry or retail or some other area of the workforce that is fairly difficult work and also receives little pay.

Also, the problem with this is that it assumes a sense of superiority of Americans over people in other countries. It assumes that we deserve or are entitled to the more fun, creative jobs, and that people in other countries should be happy to take the boring jobs we don't want to do, receiving substantially less pay for it. The problem with this way of thinking is that it is still a hierarchy. In order for people around the world to move up the ladder, there has to be someone else that is so desperate for work that they will take the boring jobs after them. It's also problematic for the environment, because usually it means that the people in those places have no other alternative but to move to a city and take a job in a factory or call center because their way of life is no longer possible because their resources have been destroyed, taken over, or made toxic through pollution.

So while Friedman is correct that the Internets do make the global middle class feel flatter, I think he failed to take into account several important factors of the extreme hierarchy we are still dealing with, and the impacts this entitlement has on the world's people and land.
Posted by Unknown at 12:25 AM

I totally agree with your critique of Friedman's white-washing of extreme, arguably increased global inequality linked to globalization. He responds to this criticism, somewhat, in his follow-up book "Hot, Flat, and Crowded: Why We Need a Green Revolution—And How It Can Renew America." His overall view, in my view, remains too bound-up with his particular social privilege.

Thanks to the last commenter for the info about his newer book! I'll have to look into that, but that's too bad he hasn't totally moved beyond this problem.