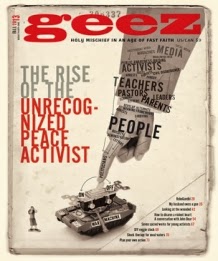 In the most recent issue of Geez Magazine (Fall 2013), you'll find an article by me called "Contemplation Leads to Peace." The full text isn't available online, but you can order a paper or digital copy online. Geez is a great magazine, whose tagline is "holy mischief in an age of fast faith." They attempt to be a magazine that appeals to people who are interested in social justice and faith, but who question some of the ways that Christianity is expressed in American culture. Here's an excerpt from their "About Us" page:


A bustling spot for the over-churched, out-churched, un-churched and maybe even the un-churchable. A location just beyond boring bitterness. A place for wannabe contemplatives, front-line world-changers and restless cranks.

This issue was entitled "The Peace Issue," so I thought I'd give it a go and submit something. The piece I ended up writing focused on the idea that healthy peace activism comes out of a space of spiritual/mystical contemplation, and gave a couple examples of people who lived in that way.
Posted by Unknown at 7:46 PM

love, would you email me a copy of your article?!