This week I experienced a couple of solid indications that I might be raising a Quaker kid (or two). First, at the dinner table the other night, my six-year-old initiated a conversation on his opinions about war and peace, how we treat the Earth, and the difficulties surrounding these issues. After about 30 seconds of this I asked if I could make a video of him sharing his thoughts, and here's what he said.


The other day, we were biking around town (as usual) with him on a trail-a-bike and the 2-year-old in the bike trailer. I noticed the 6-year-old was a little quieter than usual so I asked if everything was OK. He said, "Yeah, I'm just enjoying nature." I think this is becoming his code phrase for, "I need a little space and I'm just going to be quiet for a while," because he used it on a couple other bike rides this week. 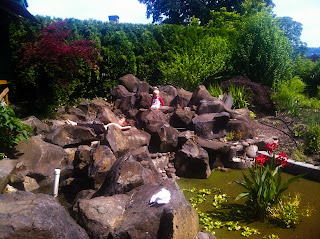 Then, this morning, we were playing outside and gardening. He sat on one of our big rocks and at first called it his "Nature Rock." He said his brother needed to find his OWN rock because he needed to be on his own for a bit. Soon he started using the term "Meditation Rock," and he helped his brother find a good one. They settled down on their own Meditation Rocks for a few minutes, then ran off to pick fresh raspberries together. We might have to make use of these rocks throughout the summer!