This morning I felt a bit annoyed as I looked for my phone cord in order to call the school bus barn to make sure my son gets his free ride to his free public education. While I rummaged around downstairs, trying to find the phone cord, I heard a huge CRASH from upstairs. I worried at first that something major had happened, but then thought about all the times when such a noise has ended up being a bucket of toy cars, trains or blocks. I walked unhurriedly upstairs to investigate and called for the eldest.

"What was that? Is everything OK?"

I couldn't see him because he was cowering behind the couch and he blamed his little brother.

In the kitchen I found the 2-year-old sitting on a stool, unperturbedly munching a whole, pilfered tomato next to a shattered oven window. 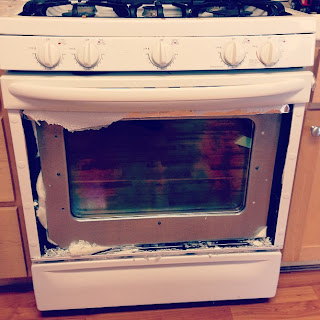 After a moment of dumbfounded silence I somewhat-calmly queried, "What in the WOLRD happened here?"

"Brother broke it," he said. Judging by the eldest's position behind the couch I figured the little one was telling the truth.

Now thoroughly frustrated, I began cleaning up the glass (in between cleaning up the messes made concurrently by the littlest as I let him eat some yogurt in the living room just this once).

Well, I'm still frustrated, annoyed and mad, but at the same time, I'm trying to see this from a bigger perspective. Yes, I couldn't find my phone cord. Yes, I couldn't call the bus barn without borrowing someone else's phone. Yes, I'm annoyed that the bus doesn't come every day unless we call to let them know we'll be there. Yes, our oven is currently unusable. But really, can I complain? No one is hurt. I generally have the ability to call people anytime and from anywhere I want. My kids have access to excellent education, and we live in a country safe enough that I can almost always trust that if I put my kid on the school bus, he'll get to school and back safely and be treated well there. I have an oven that works, except in unusual situations such as this. I can order a new part and receive it in a couple days. I have much to be grateful for, and sometimes I really need a kick in the behind to remind me of the sense of entitlement and privilege that I assume I deserve.

And the kid? The one hiding behind the couch? The one who says, "I just hit myself in the face to make up for it"? Yeah, that kid? He needs a hug, and to know that maybe I'm frustrated at the situation, but I'm not frustrated at HIM, and I still love him, and it's just a THING and it doesn't matter.
Posted by Unknown at 4:50 PM