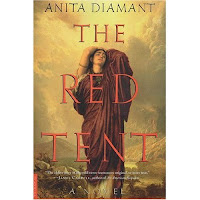 I just finished the book The Red Tent the other day, by Anita Diamant. It's an excellent book--a novel about the life of Dinah in Genesis, the daughter of Jacob who, we are told, was raped by the prince of Shechem, Jacob was offered a bride-price, and he asked that all the men of Shechem be circumcised as well, then he and his sons went in and killed them all while they were recovering.

The novel is told from the perspective of Dinah, and she tells about her life with the women of Jacob's tribe, etc. As opposed to some other novels based on biblical women, this one is well done and has strong female characters who are connected with the Divine but not the "male" god of Jacob.

It moved me to tears thinking about all the stories of my sisters and mothers that have been lost or changed just because they don't fit the "male" mold of what it is that God is like. I don't know that there's a "feminine" and a "masculine" way of seeing God or aspects of who God is, because probably in many ways "feminine" and "masculine" are just social constructs, different in every society but with some similarities based on our physical bodies and roles. But as I talked about in my post about women in the Bible, part of the stuff that gets left out of male-dominated religion is stuff that is mysterious or scary to men, but is natural and part of what makes a woman a woman. To not be able to celebrate these things, to not have stories that connect us with our mothers, to hide the things that happen in us that bring forth life, to be told these things are unclean, is so damaging to both women and men!

How much have we lost over the millenniums because women's voices have been squashed in religious contexts? I agree that there is only one God, which is a major reason goddesses have been rooted out of Judeo-Christian religion, but God is not male and is not afraid of women's particular gifts--and in fact gave us those gifts. The gifts of creation of life and the mystery of flowing with the seasons is something that connects us to God, a way I believe women are made in the image of God, rather than something that makes us unclean.

How can we recover these stories? How can we make the stories of feminine connection with the Divine part of our faith tradition? How can we do so without destroying the True Church?
Posted by Unknown at 8:48 PM

Amen. i love this book also.