I've read several books by Orson Scott Card in the last few months, and I've found him to be kind of hit or miss. He's probably best known for Ender's Game, since it became a movie. A prolific author, it is fascinating to me that he can think of so many different worlds and variations on worlds.

The books I've read recently include a short novella, Space Boy, a novel called Songmaster, and the first two books in his Mither Mages Series, The Lost Gate and The Gate Thief. Of these, I would definitely recommend the Mither Mages books! The third one just came out, but it's not on audiobook at my library yet, so I unfortunately have yet to read it.

Space Boy is an interesting thought experiment that takes about three hours to listen to. What would happen if a sci-fi wormhole was actually an invisible worm that could suck someone from one world to another? What if it was in a young child's bedroom, and that's why he was afraid of monsters in his closet? Although the novella itself was not that great, the idea was intriguing.

Songmaster was somewhat better. It imagines a future where some human beings had developed the ability to sing much more powerful emotions into their music, and follows a boy named Ansett who is particularly gifted. The book explores themes of power, control, emotion, love, hate, and the maturity process. I appreciated the exploration of later life toward the end of the book, because I think many coming-of-age stories focus on the teenage and young adult years, as if that is all the coming-of-age that human beings experience, but the transitions to other life stages do not seem to be as well developed in much of literature. But I found the book overall to be lacking a solid thread of meaning and purpose. The Mither Mages series is great! I can hardly wait to listen to the third one. This series imagines that the gods of the ancient world were actually a separate group of human-like beings, and the intermarriages we hear about in the stories of those gods ended up diluting their stock so that, though the ancient families still exist, they are not as powerful. It explains a lot of otherwise-strange phenomena in history, such as certain people who have particular connections to plants or rocks, why some people in ancient times could do miracles, and of course the reasons for all the mythology from different cultures about their gods, who apparently don't have the powers they seem to have had in the past. This series is an imaginative take on that concept. I learned quite a bit about ancient mythology, and the story was fun. 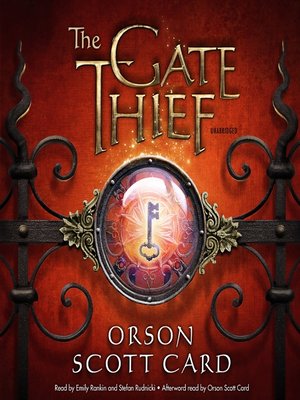 The first one takes place on Earth in a rural Virginia commune, and tells the story of a mage who is one of the first gate mages in recent history. Gates magically take people from one place to another like stepping through a gate. In the ancient world of the Mither Mages, there used to be gates all over the place, from place to place on Earth, and from Earth to other planets, but the Gate Thief stole them all. I suppose what I like most about these books, besides the imaginative ideas, is that the author shows the character moving through a variety of stages of understanding himself and his world, coming to empathize with the enemy and grapple with his own role. Is he the hero, or the villain?
Posted by Unknown at 8:49 AM

Orson Scott Card's best and most deep book is Speaker for the Dead. The depth of the characters, the plot, and the themes is amazing. Also his alternative history novel, Pastwatch: The Redemption of Christopher Columbus wrestles with complex questions of ethics. Great book too, though it has a slow start in the first 80 pages or so when he is setting the historical situation.

If you like science fiction, you might also check out the famous trilogy Hyperion by Dan Simmons.

In my opinion those 3 novels are by far the most imaginative, character-focused, and philosophically concerned books I've read (a couple of them about 3 times).

Thanks for the suggestions, Daniel! I'll definitely look into those!